Professor Thomas Maschmeyer has taken his reimagining of zinc-bromine battery chemistry to the point of commercial launch; a new installation at the University of Sydney demonstrates the Gelion battery’s utility and appeal.

Professor Thomas Maschmeyer has taken his reimagining of zinc-bromine battery chemistry to the point of commercial launch; a new installation at the University of Sydney demonstrates the Gelion battery’s utility and appeal. 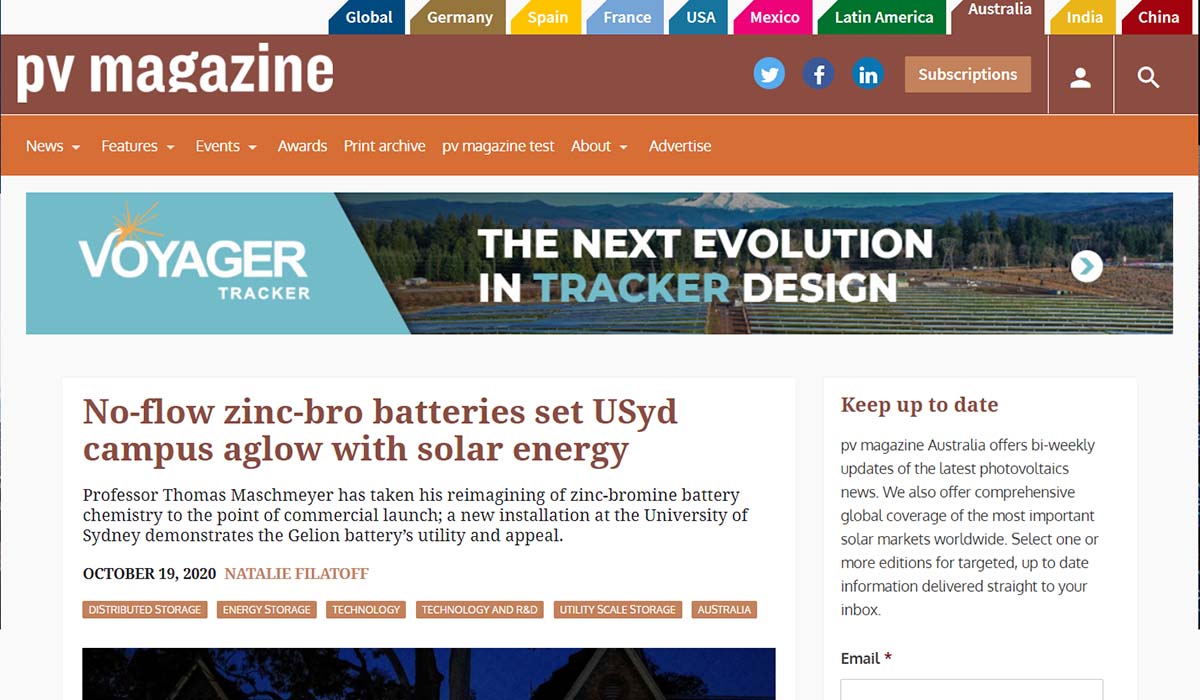 Australian battery-storage manufacture took another leap forward this morning with the launch of the first commercial application of Gelion Technologies’ Endure battery which it says is a safe, inexpensive, long-life, completely recyclable and scalable technology that rivals lithium-ion, especially in hot-climate applications.

The brainchild of Professor Thomas Maschmeyer, who first tested his idea for a non-flow zinc bromine battery using “two pieces of carbon paper covered in gel, stuck together with some wooden washing pegs and some silver solder wire”, Gelion Technologies today delivered six solar-panel-shaded tables with benches on the University of Sydney’s Camperdown and Darlington campus.

The attractive set-up produces and stores solar energy during the day to power under-panel lighting when the sun sets, allowing students and university visitors to enjoy the coming summer evenings with light to study or just chat; the new benches save costs, not only in energy, but in bypassing electrical infrastructure — they’re off-grid.

“Our Endure batteries have a significant advantage in the Australian market, where off-grid battery demands can be very challenging,” says Maschmeyer, referring not so much to campus conditions, but to the fact that his technology operates efficiently, without energy-draining cooling such as air-conditioning, at the high temperatures it is expected to encounter when powering remote communities, mining applications and agricultural industries.

The basic cell of Endure’s breakthrough made-for-solar energy-storage system resembles an ice-hockey puck. The plastic disc contains little more than “salty water, some carbon and some special soap”, Maschmeyer told pv magazine last year. It can be stacked and combined into modules to store anything from one kilowatt hour (1 kWh), to utility-scale, fully containerised megawatt hours of energy.